We Find The Best Gadgets And Review Them
Blog

IoT or Internet of Things has been a rage in the recent times. In an age where we like to stay connected where we like to control things at the tap of a finger, IoT has the best future. The concept of connected things is not new to us. In fact, it has been there for decades. But it is only in the recent decade that we have seen a magnificent growth in IoT. Earlier there were a lot of challenges that were stopping the growth of IoT besides the skepticism of few to allow the devices to communicate with each other. But now as people start understanding the convenience of the whole system we see that the technology is burgeoning.

Internet of things, as the name indicates is the establishment of a network where “things” are connected and not just people. The connected things can all communicate with each other. We talk about smart homes, smart cities and smart energy grid and more as if they are concepts of the future. But the future is already here. We find a lot of smart home automation systems easily available these days. The change here is the fact that it is the same appliances that we already use but they come with sensors, communication modules, and few other useful upgrades. These upgrades allow them to act as individual communication devices. So there can be a master control unit, say a smartphone that can send out commands to these devices. Here all the devices that connect to the network would be assigned an individual address and each of them would send and receive data. So you can control all your appliances with your smartphone, right from turning them on or off to check their condition and lots more.

A Quick History of Internet of Things

As we have seen IoT as a concept emerged several years ago. To be very frank, the very first time that we started using barcodes for labeling objects the precursors of IoT had begun. This was the first way we started giving a unique ID to each “thing”. Though the “thing” could not communicate back or receive data, we could gather data about the product all with the help of the barcode. Now things have gone one step forward to allow the products to be able to communicate back as well. To be precise the RFIDs were the actual foundation blocks as they carried a larger amount of information.

Way back in 1982 we had the “Only” coke machine on the internet. Information about a coke machine installed at Carnegie Mellon University could be checked from the computers in the university network as it was connected to the network. This was the very first smart device that was popularly spoken about all over the world. This is how the Internet of Things began and the rest, as we know, is history! After this legendary start, there were slowly several other new developments that caused the steady growth of the concept and allowed people to understand the benefits and thus accept it easily as well.

Is IoT Changing The World?

IoT is no more just a tech term that is fancied by the IT companies of the world. Every field, every country is now seen exploring the wide opportunities we find in this domain. Here are the ways in which IoT is changing the various fields: 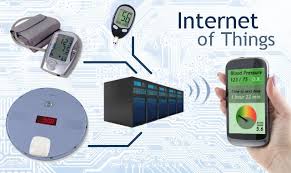 From ensuring timely medical assistance to helping critical patient monitoring IoT has a major role to play now in the healthcare industry. Here are the main benefits delivered by IoT in healthcare:

A great example for IoT in healthcare is the fitness bands that we all own. These bands with their efficient sensors can track bodily parameters including the heart rate, blood pressure, sleep patterns and more. They also come with communication modules that allow them to be connected with other devices like the smartphone. You can then access data from the fitness band on your smartphone. This is just a small example of the application of communication between things that can help improve the quality of healthcare services.

With the growth of e-commerce the retail industry is facing a tough competition. But this has not made the physical stores obsolete. Taking care or retail stores is not an easy job and the slightest miscalculation can lead to a lot of setbacks. So here are the ways in which IoT helps in the retail industry:

The store of the future might be a perfect blend of the internet shopping and physical stores. Objects do not have to be physically present for the customers to carry them along. Customers could simply scan the objects from the smart aisles and they would all be packed and ready for pick by the time the customer is done shopping. Such a concept could also be established only with the help of IoT that would allow the devices to communicate with each other efficiently.

IoT is one of those technologies that cannot grow independently. It is given a strong supportive hand by wearable technology. Wearable devices now come with accurate sensors that can collect real time data with utmost efficiency. This makes tracking and communicating with the device simpler. They can generate accurate data to communicate and makes the actual communication more relevant. After all, we do not want any erroneous irrelevant communication to be happening between devices as this would only use up the communication channels uselessly.

IoT Can Benefit The Businesses Big And Small:

With the improvement of the processes that can be achieved with the incorporation of IoT, we understand that this has a lot of business benefits as such. Business models can be reformed. The interaction between the businesses and the interaction between the customers and the businesses can all be enhanced. Asset tracking can be made better with IoT. Sensors can be embedded in all the assets that need periodic tracking and accounting. This makes it easy to adopt preventive maintenance and not wait for major repairs. Maintenance costs would be much less than repair costs.

With smarter timely communication the business processes are shortened. The operating costs can thus be reduced as well. IoT can also help improve the security and safety in the workplace. There can be connected cameras to monitor the workplace to achieve this. Overall IoT can thus improve the productivity of businesses small or big.

We have been talking about the bright side of the game so far. But one thing that cannot be denied is the fact that the road that led to the current situation has been a rough one for IoT. There have been a lot of hurdles. For example, the hardware limitations in devices were one of the primary concerns. When we had spoken about incorporating a communication chip inside a light bulb a few years ago, some people simply laughed because given the hardware development at that time this all sounded far-fetched. But with nanotechnology and the advancement in the manufacturing sector, we now find sophisticated hardware that also boasts of the highest reliability. This is why we are now confident about allowing every device to get smart. Because we know that we now have the technology that makes it possible and the hardware to support it the best possible way.

Similar to the challenges of the past the future also presents numerous hurdles that IoT would have to tackle:

The connected devices would all be gathering data continuously and communicating with each other. How much data is being gathered would depend on the actual types of sensors being embedded and the permissions being granted. How much of the user’s personal data is being gathered here and how much of it is actually accessible by the manufacturer would be another aspect to consider. This is a matter of privacy. Unless manufacturers are transparent about the permissions required and the data is collected it would be a breach of the user’s security. In fact, this is one of the main concerns that has remained from the past till date that has stopped several users from accepting IoT.

These remain the top most priority of the developers in IoT. More the number of connected devices, the larger would the network be and the tougher it would get to actually track all the connected devices if the system is not robust and resilient. Hackers are also getting better tools now and they are now being able to hack even the most secure system. For example, if you have a smart home automation system when one of the devices in the system is hacked hacking the home network becomes simpler. So your weakest device would be the entry way for hackers. This means that for IoT to be made reliable every device that gets connected should come with the best possible security incorporated in their algorithms.

We know that the internet is explosively expanding. Earlier when the internet addressing methods were designed it was perceived mainly for the communication of the computers. The number of computers expected to be connected to the network was believed to be less. Then came the concept of connecting the mobile phones to the network. This has caused a major problem since devices are being added by the hour! Some predictions say that there would be billions of “things” connected to the internet by the year 2020. These would all have to be assigned unique addresses. This would increase the length of the address and thus the whole system would have to be designed to handle the new addressing systems.

No matter how many challenges lie ahead, the progress currently indicates that IoT is surely going to rule the world in the next few years. This is only going to make life simpler and smarter as well.

← Previous Post
Next Post →
The Great Device © 2018 TheGreatDevice.com is a participant in the Amazon Services LLC Associates Program, an affiliate advertising program designed to provide a means for sites to earn advertising fees by advertising and linking to amazon.com.All images are the property of their respective owners. If you found any image copyrighted to yours, please contact us, so we can remove it.